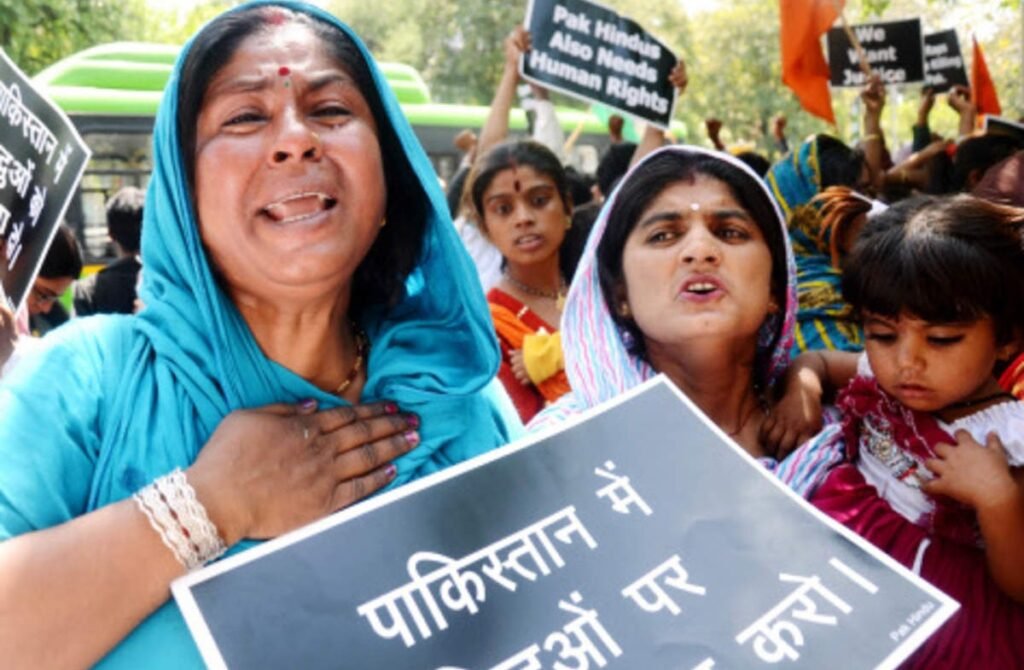 The everyday instances of discrimination against religious minorities are not only the result of Islamic extremism but many repugnancy provisions in the constitution of Pakistan actively emboldens and institutionalise these discriminations.

The recent incident of killing of a Hindu girl, Pooja Oad in Sindh district for resisting abduction attempt and forced conversion summarises the constant fear under which non-muslims, particularly Hindus and Sikhs, are forced to live in Pakistan. Apart from the constant threat to their lives via false blasphemy charges, there exist discriminatory legal, institutional and constitutional provisions which force religious minorities in Pakistan to live a life of second class citizens.

This article makes an attempt to show the many ways in which Hindus and Sikhs of Pakistan are being discriminated against and their human rights are violated with impunity albeit with State support.

Rampant violations of rights of religious and other minorities are reported from Islamic countries on a daily basis. In this context, Pakistan is a living hell for religious minorities. Pakistan, the so-called land of pure, is literally on its way to becoming ‘Pure’ i.e free of Hindus and Sikhs. The 2017 census data shows that Muslims have become 96.47% of the total population and on the other hand religious minorities have shrunk. Hindus, for example, are at their all-time low at 1.73% of the population.

Similar is the situation for other religious minorities. Religious minorities are not treated as equal citizens and this fact is even boasted by the constitutional heads of the country. For example, Khawaja Nazimuddin, the 2nd Prime Minister of Pakistan, had said, “I do not agree that religion is a private affair of the individual nor do I agree that in an Islamic state every citizen has identical rights, no matter what his caste, creed or faith be”.

In Pakistan, there lies religious merit in converting non-Muslims to Islam and whole state machinery is found complicit in such activities against minorities. According to their own human rights commission report, around one thousand young Hindus and Christians are forced to convert to Islam every year. Atrocities on Hindu minorities, particularly on Scheduled Caste Hindus and women are particularly worse.

These atrocities started with the very birth of Pakistan in 1947. Then Scheduled Caste leader of Bengal, Jogendranath Mondal (1904-68), who made a so-called common cause with the Muslim League, had to come back to India just after a few years. His letter is a historic document indicating the abysmal status of minorities in the then just born Pakistan. Also, it is a lesson for today’s so-called Ambedkarites who are seeking a common goal with such Islamic fundamentalist forces in India.

Constitutionally, Pakistan being an Islamic state, its present constitution has many repugnancy clauses which discriminate against religious minorities. For example, sections 298-B and 298-C of the Pakistan Penal Code restrict religious groups from freely practising their faith and Clauses 295-B and 295-C on blasphemy can endanger the very life of the accused individual. Blasphemy laws perpetuate dehumanizing discrimination against minorities. They live under a constant threat of Islamic vigilantism.

Since 1990, scores of Pakistanis hailing from religious and linguistic minorities in Pakistan have been killed over claims of blasphemy. Even Muslims who speak against these inhuman laws are killed. The Minorities’ Minister, Shahbaz Bhatti, was assassinated in 2011 for speaking against the blasphemy laws. Also, Asia Bibi languished in jail for many years. After calling the blasphemy law a ‘black’ law, Salman Taseer, the governor of Punjab, was shot dead by Mumtaz Qadri, his bodyguard, in 2011. As recently as in 2020, UN High Commissioner for Human Rights Michelle Bachelet called out this draconian law and stated, “Religious minorities in Pakistan continue to face violence and repeated attacks on their religious places of worship and government’s failure to amend the blasphemy law led to violence against them”.

Legally also, Pakistan State discriminates against religious minorities in many ways. Take the example of the “Hindu Marriage Act, 2017” for the constitutional recognition of Hindu Marriages. However, a major loophole in it is used in the forceful conversion of Hindu women. It is section 12 (iii) which stipulates “…the marriage may be terminated on the basis of either the husband or the wife converting to some other religion”. This section annulled any imaginary protection provided to women. Abduct a married woman, force her to convert, force her to say it is voluntary and her marriage is annulled. Similarly, Ahmadis live in constant fear of harassment or assault either to themselves or their homes, workplaces and places of worship. For instance, under Section 298-B of the Pakistan Penal Code, Ahmadis are prevented from using any Islamic epithets that might result in them being mistaken as Muslims. In addition to this, Section 298-B (2) criminalises the use of the word “Azan” for the call to prayers by Ahmadis.

In a country infested with Sunni Islamic radicalisation, there is no security and freedom for women and even other ethnic and linguistic Muslim minorities. Women belonging to religious and ethnic minorities face double marginalisation. Though Pakistan is a signatory to the Convention on the elimination of all Forms of Discrimination against Women (CEDAW) yet crime against women continues unabated. Hatred is being fomented in society through an inappropriate representation of minorities and particularly women folks in society and also in the educational curriculum. The judicial system has also failed to prevent the occurrence of the crimes and give justice to the victims.

Punjab dominated military-politician complex violates the human rights of Balochs, Hazaras, Sindhis, Ahmadis and people of Gilgit-Baltistan. Violent attacks on their social gatherings or religious places by Sunni extremists groups and people are very common. Shias, Ahmadi Muslims, Christians, and Hazaras are particular targets of these attacks. In 1974 Ahmadis were officially denied even the legal rights to be considered Muslims. The Gojra riots were particularly harrowing in which several Christians, including women, were killed. Baluchistan’s independence movement is violently suppressed by the Punjabi dominated military here. Forceful abductions, rape, enforced disappearances and extra-judicial killings of the detainees by the military are frequent in the case of the Baloch and Pashtun minorities. Though Pakistan adheres to the Universal Declaration of Human Rights and is a signatory to several international human rights treaties such as the International Covenant on Civil and Political Rights (ICCPR). However, these ethnic and linguistic minorities along with religious minorities remain disenfranchised in society and are not fully included in the political life of the country.

Thus, every basic norm of human rights is being grossly violated in Pakistan by legal institutions, society and non-state actors. Hence, it’s a mandate on the international community concerned with the protection of human rights to take necessary measures. This is high time that international agencies, like the Office of the High Commissioner for Human Rights (OHCHR), must intervene effectively before it is too late and minorities are completely wiped off from the country. Pakistan is signatory to many humanitarian covenants however gross violations of rights of religious minorities go unnoticed internationally. The UN and the other concerned agencies must give up their partisan behaviour and speak up vocally for religious minorities of Pakistan.

(This article is an aggregation of the facts that are already in the public domain. Inputs have also been taken from the various reports of a Delhi based Centre for Democracy, Pluralism and Human Rights headed by Dr Prerna Malhotra).